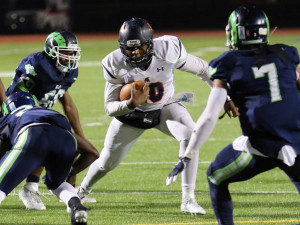 The North Springs Spartans returned to the 5-A football playoffs again this year, facing the Region 5 #1 seed Arabia Mountain Rams at Hallford Stadium. After trailing 28-0 at halftime, Coach Scotty Parker’s Spartans battled back before some untimely penalties left them short at 35-21. The Spartans drove to their 44 before turning the ball over on downs to open the game. Arabia Mountain used a swing pass left to score on their first play. After a Spartan sack fumble lost at their 13, the Rams scored another TD in one play to lead 14-0 three minutes into the game. Jahvon Millard returned the kickoff to the 41 to start a drive to the Ram 10 with a Brian Adams throw to Zahir Nichols, pass interference, and a keeper with fumble recovered by lineman Francis Shema. Before kicker Osman Rusayev could kick a field goal, a bobbled snap ended the promising possession. The defense had a great series led by tackles from Jahvon Millard, Dante Camp, Stanley Jackson, and JaRon Bradley.
The Spartans gambled successfully on 4th down on the next series and followed that with Adams passes to Nick Keou and Ryan Gordon, Zahir Nichols, and Jalen Delaney. Combined with Caleb Neely carries, the Spartans drove to the Ram 7 before turning the ball over on downs. The Rams quickly drove 93 yards for another TD and 20-0 lead. Caleb Neely rushing helped the Spartans drive to the Ram 23 before turning the ball over on downs again.  With 3 seconds left in the half, the Rams ran a beautiful reverse option for a 28-0 lead.
The Spartans opened the second half with the first of 4 unsuccessful onsides kickoffs, but Jalen Delaney soon recovered a Ram fumble at their 34. Ryan Gordon caught a pass at the 17 but a subsequent chop block call led to a 4th and 27 play. Adams hit Zahir Nichols for 26.5 yards, coming up a foot short of a first down. JaRon Bradley’s QB sack ended the next Ram drive. Caleb Neely smashed his way to the Ram 15. An Adams keeper and Kyree Greene run set up a Neely 3-yard TD and Osman Rusayev PAT with 3 minutes left in the 3rd. Unfortunately, the Rams countered with a TD 2 minutes later.
Early in the 4th quarter, Adams hit Zahir Nichols to the Ram 33. Two plays later, Adams lofted a beautiful pass to Ryan Gordon for a 31-yard TD and 35-14 score. The Spartan defense stopped the Rams on downs at the NS 20. Caleb Neely powered his way to the Ram 46 and then 37 as part of his impressive 137 yards of rushing. Zahir Nichols caught a pass at the 25. Nick Keou was interfered with to move the ball to the 13 and then caught a TD pass right on the goal line to pull within 35-21 at the 7:05 mark. A Graylyn Stokes sack helped force a Ram punt. Nick Keou caught a 17-yard pass and eventually Jalen Delaney to the Ram 26, but another chop block call and then holding squashed the Spartan drive. Arabia Mountain then ran out the clock.
The big rushing night and aggressive aerial assault would not have been possible without the yeoman work of the offense line: DanTee Palmer, Brendan Liu, Stanley Jackson, Francis Shema, TJ Faust, and Jordan Harvey. Congratulations to the Spartans for another winning season!