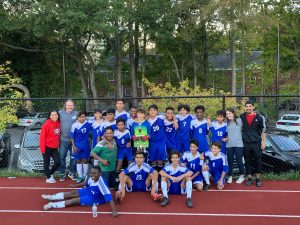 The Sandy Springs Stallions 7th and 8th grade boys soccer team won their first ever MAAC league Championship Wednesday Oct.23, 2019. SSMS defeated Atlanta International 2-1 in a chilling performance.
The title match was a rematch for both teams as they faced each other in 2018 for the MAAC championship which was won by Atlanta International.
A seasoned Stallions team defeated Atlanta International by a final score 2-1.
The teams played to 1-1 draw at the end of regulation play. This was followed by a 10 minute overtime period which also ended with neither team able to score. With the score set at 1-1 the teams headed to penalty kicks to decide the winner.
Five players from each team was selected for the kicks. Each team, taking alternate kicks, would have 5 chances. In the first 3 rounds, the Stallions would make all 3 of their PK kicks and the Sandy Springs keeper followed by making 3 straight saves to secure the victory for the Sandy Springs Stallions.
CONGRADULATIONS TO THE STALLIONS OF THE SANDY SPRINGS MIDDLE SCHOOL SOCCER PROGRAM FOR WINNING THEIR FIRST EVER MAAC LEAGUE CHAMPIONSHIP.